We’ve escaped the wearisome fields of Illinois and are now in Minneapolis! But before we got here, we made way through Iowa and even dipped into Wisconsin.

Iowa was refreshing thanks to its rolling hills and visual stimuli along the Mississippi River. We were all so gutted by our previous 10 days and their lack of excitement, so Iowa was especially nice to ride through.

The Iowa sky evolved through so many deep shades of blue as the sun set each night.

An American flag flying over the Mississippi in Lansing, Iowa. I’ll never take a picture dripping with so much patriotism.

A 100 mile ride initially brought us into Iowa, and Drew, Steph and I talked about how we hardly have time to digest everything that’s happened heretofore. We leave just as quick as we come every night, and we hardly ever have time to reflect on everything.

And just like that, a day after that conversation we rode into our tenth state, Minnesota. The Land of 10,000 Lakes has been kind to us so far. I really can’t complain about the occasional rainfall and detour when the majority of our ride’s been along the Mississippi, the wind’s been at our backs and the destinations have been lively. Wabasha will go down as one of the more rambunctious nights on the trip, and we even cut mileage along the way to get a whole extra rest day in the Twin Cities! I cannot emphasize enough how stoked I am to not wear a chamois for 72 hours.

A view over the mighty Mississippi in Minnesota. The horizon line you see is Wisconsin! 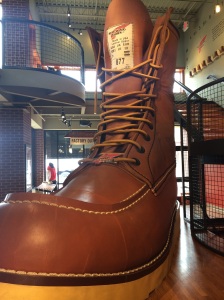 The Red Wing boot HQ in (you guessed it) Red Wing, Minnesota! This right here is the world’s largest boot, which I think can be described as “mildly interesting.”

A wall of boots in the shop. It’s been so long since I’ve worn clothes I actually covet, and seeing this many beautiful boots made me miss dressing well and not in spandex dearly.

From a bridge in Saint Paul. Underneath it was a public park totally flooded.

I’m writing this from an Aloft Hotel in Minneapolis, and I already have so many thoughts and pictures of this incredible city, but I’m going to let my time here saturate a bit more before going into detail! I’ll also deliver on my promise of video footage of us riding!